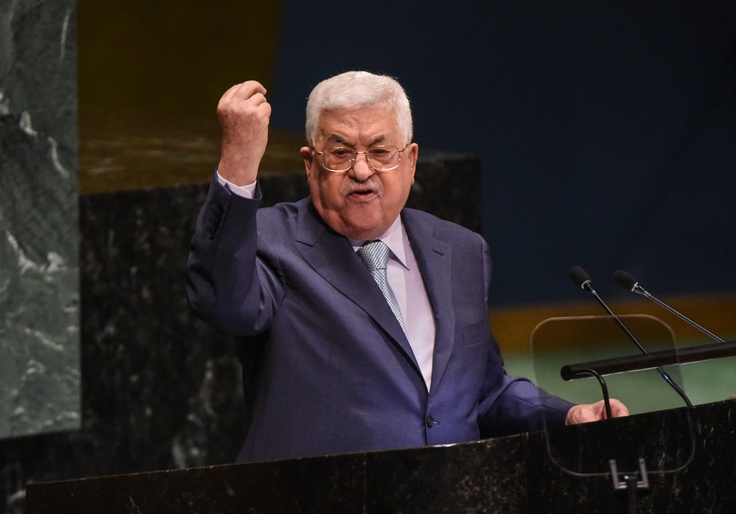 “I do not endorse armed resistance at the moment, but I may change my mind later,” President Mahmoud Abbas said in a recent Arabic-language interview translated into English on the Elder of Ziyon website, a blog that tracks Israeli-Palestinian issues. “I do not adopt military resistance at this time, but it is possible that I change my mind tomorrow or after tomorrow, or any time.”

Abbas’s comments come at a troubling time for his Palestinian Authority governing body, which is the weakest it has been in decades. The Iran-backed Hamas terror group, which controls the Gaza Strip, has been challenging Abbas’s power, and several armed faction groups have also joined the fray in recent months. The challenge to Abbas’s rule threatens to topple a fragile security framework with Israel that has been vital to stopping terror attacks on the Jewish state. Abbas’s most recent remarks are likely to inflame an already dangerous situation, according to Middle East observers.

“The assessment right now is that we have not seen this much unrest in the West Bank in pretty much 15 years,” Jonathan Schanzer, a former terrorism finance analyst at the Treasury Department who now works on Middle East issues at the Foundation for Defense of Democracies think tank, told the Washington Free Beacon.

Abbas “would be unwise to unleash additional chaos in the West Bank,” Schanzer said. “If things escalate too far, it is highly likely he will be among the most prominent casualties.”

A return to terrorism would also shatter any hopes the Biden administration has of reigniting a long-stalled peace process between Israel and the Palestinians.

Abbas during the interview blamed Israel for any potential change in policy, saying the Jewish state’s efforts to thwart terrorism are overly aggressive.

“If Israel continues with its actions, I will cancel the security agreement with it. Why continue?” Abbas asked. “Why am I committed to security coordination? And we can breathe without security coordination. Before that, we were breathing, and our people were fighting the occupation.”

The Palestinian Authority is losing power across the West Bank, its onetime stronghold. Israeli forces assess that the PA has already lost control of two key cities—Jenin and Nablus.

Small faction groups are also rising up to challenge Abbas’s rule in the West Bank.

In Nablus, an armed resistance group dubbed the Lion’s Den has been leading attacks on Israeli targets. Al Jazeera in an October report described the group as “changing the face of Palestinian resistance.”

Terrorist groups like the Lion’s Den are not directly affiliated with Hamas or Abbas’s Fatah party, but they appear to get support from both.

This has posed significant challenges for Israel, which must decide whether to enter militant-occupied cities to clear out the terror factions and risk further upsetting Abbas or allow the groups to operate in favor of preserving security agreements with the Palestinian leader.

The shifting landscape has also provided an opening for Iran, which is increasing its support for Hamas in the Gaza Strip and for Hezbollah in Lebanon. Israel has noted a significant uptick in Iranian weapons-smuggling to Hezbollah, which then transfers the arms into the West Bank—an area typically immune from such activities due to Abbas’s strict control on the territory.

Iran’s goal is to weaken Abbas, who is 87 years old. When the Palestinian leader dies, the power vacuum will become even greater, leaving a clear opening for Iran’s assets in Hamas.

To this end, Iran has created so-called nerve centers in Lebanon and in the Hamas-controlled Gaza Strip, according to Schanzer. The goal is to foment unrest and create security flashpoints with Israel, as well as to erode support for Abbas.

While these efforts have garnered few headlines in the West, Israeli security services have become increasingly concerned.

“The situation could potentially go from bad to worse,” said Schanzer. “Israeli officials right now are signaling that the West Bank is the least stable of the security issues that they’re tracking through the transition” to the incoming government run by Benjamin Netanyahu.