China is set to announce in coming days an easing of its COVID-19 quarantine protocols and a reduction in mass testing, sources told Reuters, a marked shift in policy after anger over the world’s toughest curbs fuelled widespread protests.

Cases nationwide remain near record highs but the changes come as some cities have been lifting their lockdowns in recent days, and a top official said the ability of the virus to cause disease was weakening.

Health authorities announcing the easing in their areas have not mentioned the protests – the biggest show of civil disobedience in China for years which ranged from candle-lit vigils in Beijing to street clashes with police in Guangzhou.

The measures due to be unveiled include a reduction in mass testing and regular nucleic acid tests and moves to allow positive cases and close contacts to isolate at home under certain conditions, the sources familiar with the matter said.

That is a far cry from earlier protocols that led to public frustrations as entire communities were locked down, sometimes for weeks, after even just one positive case.

The frustration boiled over last week in demonstrations of public defiance unprecedented in mainland China since President Xi Jinping took power in 2012, and come as the economy is set to enter a new era of much slower growth than seen in decades.

Less than 24 hours after violent protests in Guangzhou on Tuesday, authorities in at least seven districts of the sprawling manufacturing hub, said they were lifting temporary lockdowns. One district said it would allow schools, restaurants and businesses including cinemas to reopen.

Adding to the sense of a shift in direction, Vice Premier Sun Chunlan, who oversees COVID efforts, said the virus’s ability to cause disease was weakening, state media reported.

“The country is facing a new situation and new tasks in epidemic prevention and control as the pathogenicity of the Omicron virus weakens, more people are vaccinated and experience in containing the virus is accumulated,” Sun said in comments reported in state media.

The mention of a weakening pathogenicity contrasts with earlier messages from authorities about the deadliness of the virus.

“Sun’s speech, in addition to the notable easing of COVID control measures in Guangzhou yesterday, sends yet another strong signal that the zero-COVID policy will end within the next few months,” analysts at Nomura said in a research note.

“These two events perhaps point to the beginning of the end of zero-COVID.”

In the capital, Beijing, some communities have begun preparing for changes.

One community in the east of the city holding an online poll this week on the possibility of positive cases isolating at home, residents said.

“I certainly welcome the decision by our residential community to run this vote regardless of the outcome,” said resident Tom Simpson, managing director for China at the China-Britain Business Council.

He said his main concern was being forced to go into a quarantine facility, where “conditions can be grim to say the least”.

Prominent nationalist commentator Hu Xijin said in a social media post on Wednesday that many asymptomatic carriers of coronavirus in Beijing were already quarantining at home.

Expectations have grown around the world that China, while still trying to contain infections, could look to re-open its borders at some point next year once it achieves better vaccination rates among its hesitant elderly.

Health experts warn of widespread illness and death if COVID is let loose before vaccination is ramped up.

Chinese stocks and markets around the world dipped initially after the weekend protests in Shanghai, Beijing and other cities, but later recovered on hopes that public pressure could lead to a new approach by authorities.

More COVID outbreaks could weigh on China’s economic activity in the near term, the International Monetary Fund said on Wednesday, adding it saw scope for a safe recalibration of policies that could allow economic growth to pick up in 2023.

China’s strict containment measures have dampened domestic economic activity this year and spilled over to other countries through supply chain interruptions.

While the change in tone on COVID appears a response to the public discontent with strict measures, authorities are also seeking out for questioning those present at the demonstrations. 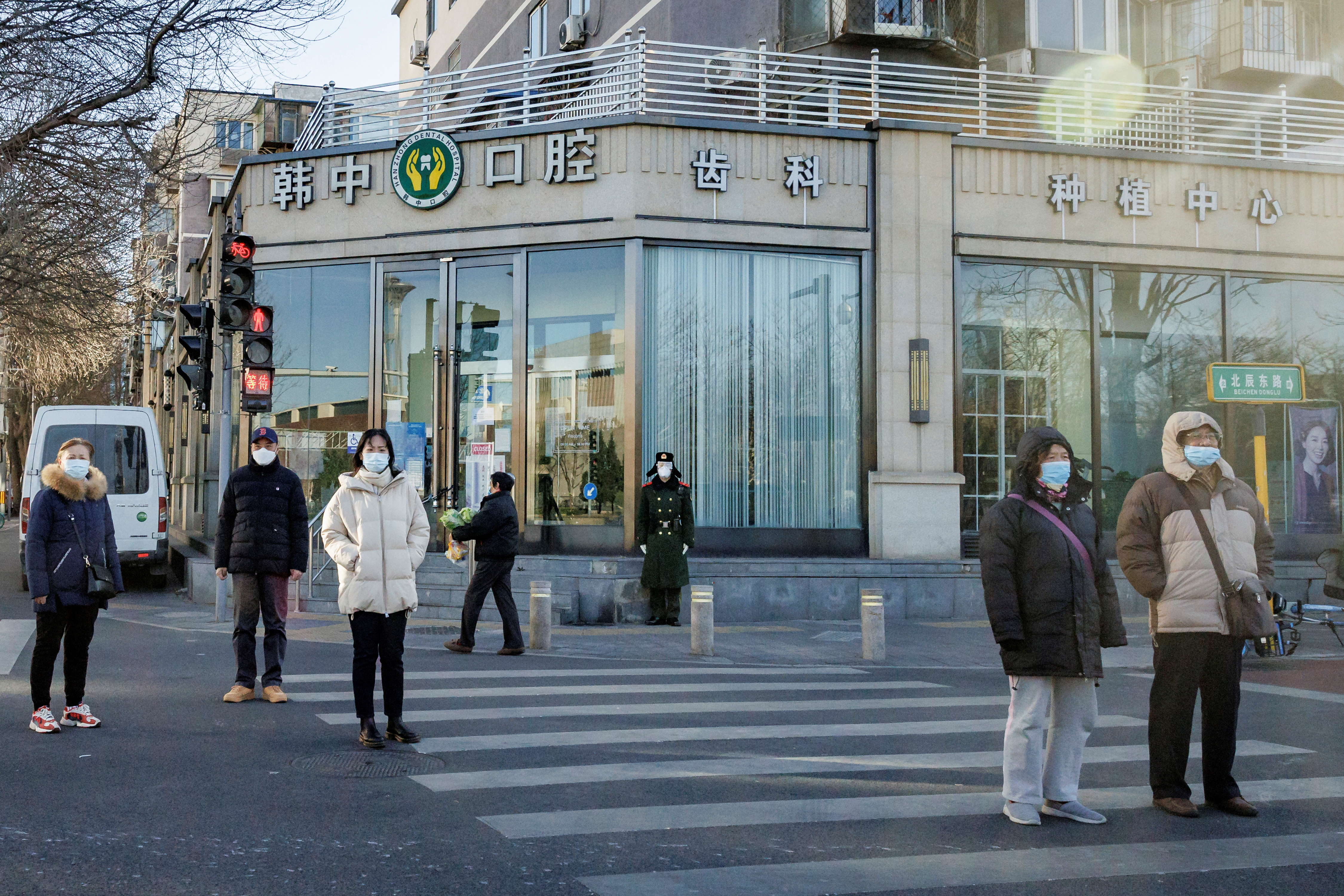 A member of the Chinese People’s Armed Police Force wears a face mask as he keeps watch on a street amid coronavirus disease (COVID-19) outbreaks in Beijing, December 1, 2022. REUTERS/Thomas Peter 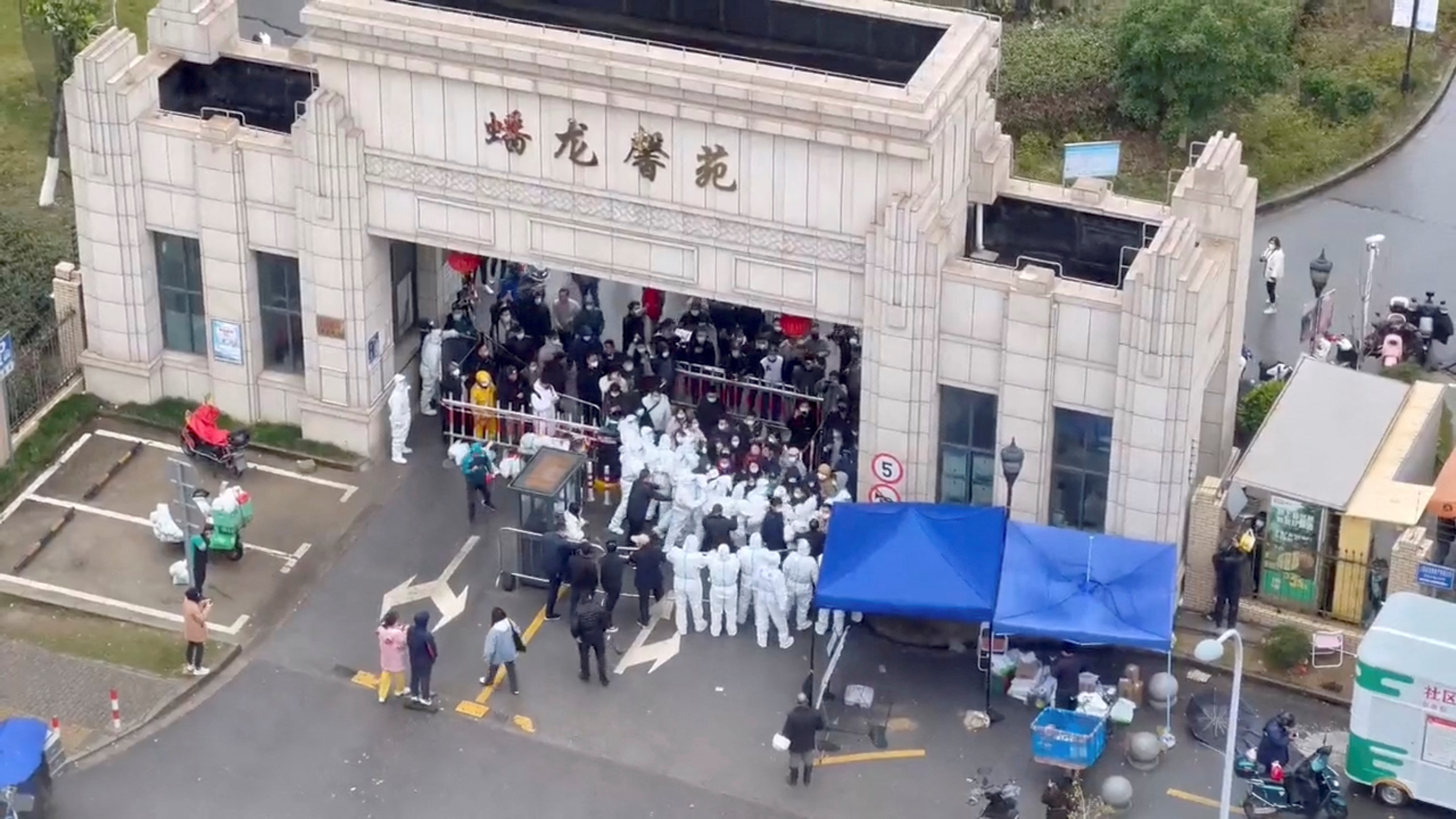 Residents confront workers donned in protective suits who are blocking the entrance of a residential compound, amid the coronavirus disease (COVID-19) outbreak in Shanghai, China, in this still image obtained from a social media video released November 30, 2022.Video obtained by Reuters/via REUTERS THIS IMAGE HAS BEEN SUPPLIED BY A THIRD PARTY. NO RESALES. NO ARCHIVES 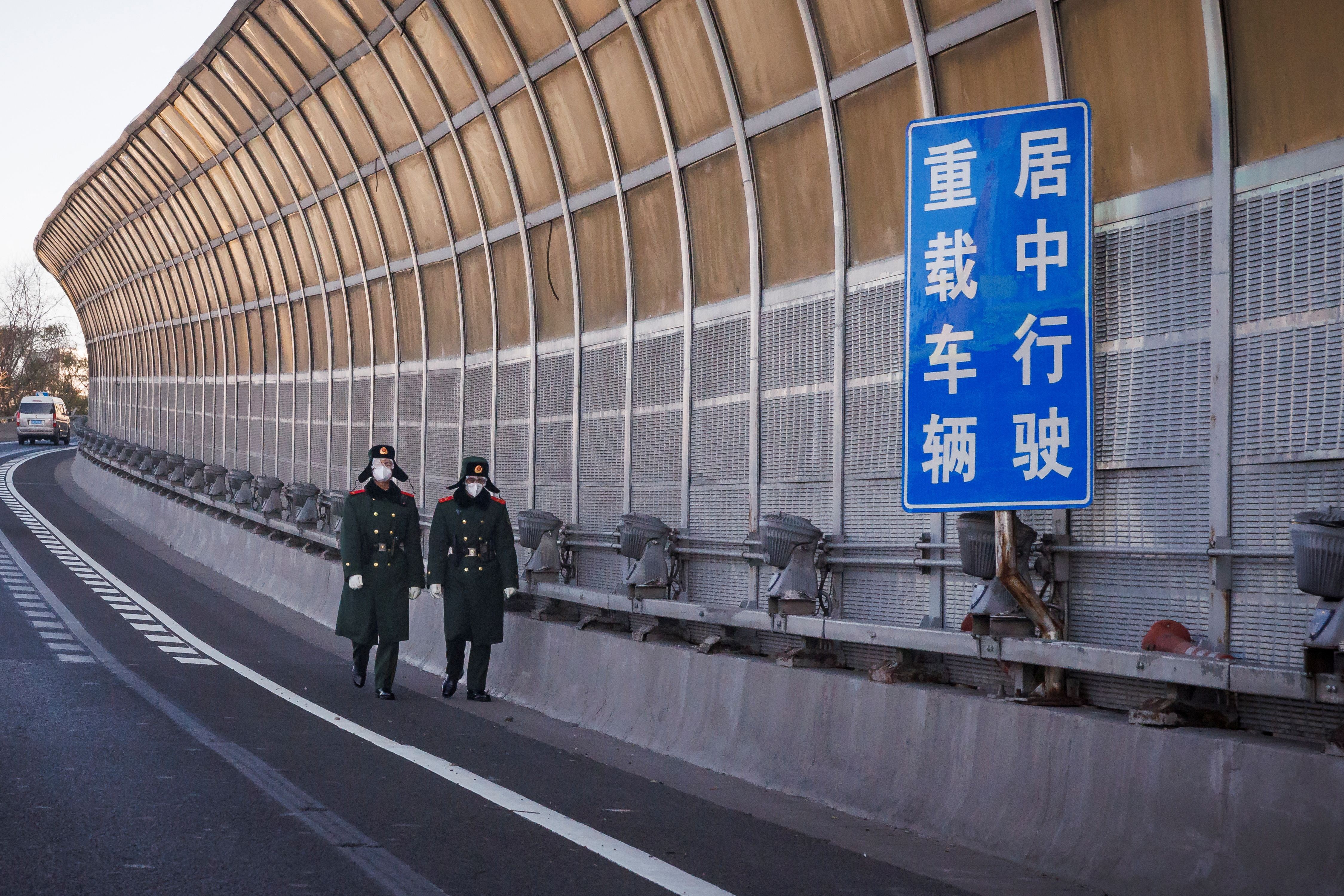 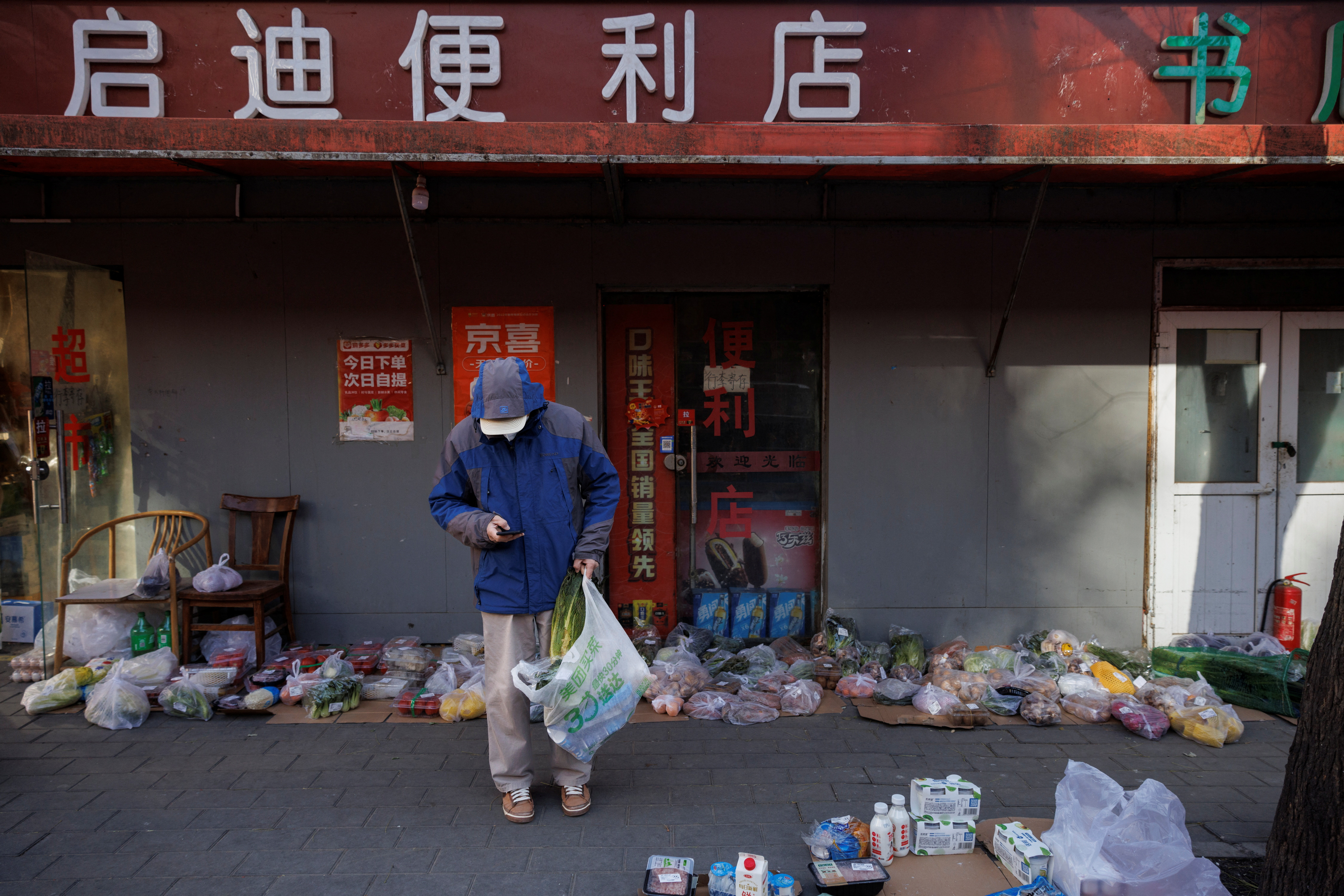 A man picks his grocery purchases in a street as many shops remain closed because coronavirus disease (COVID-19) curbs in Beijing, China November 30, 2022. REUTERS/Thomas Peter 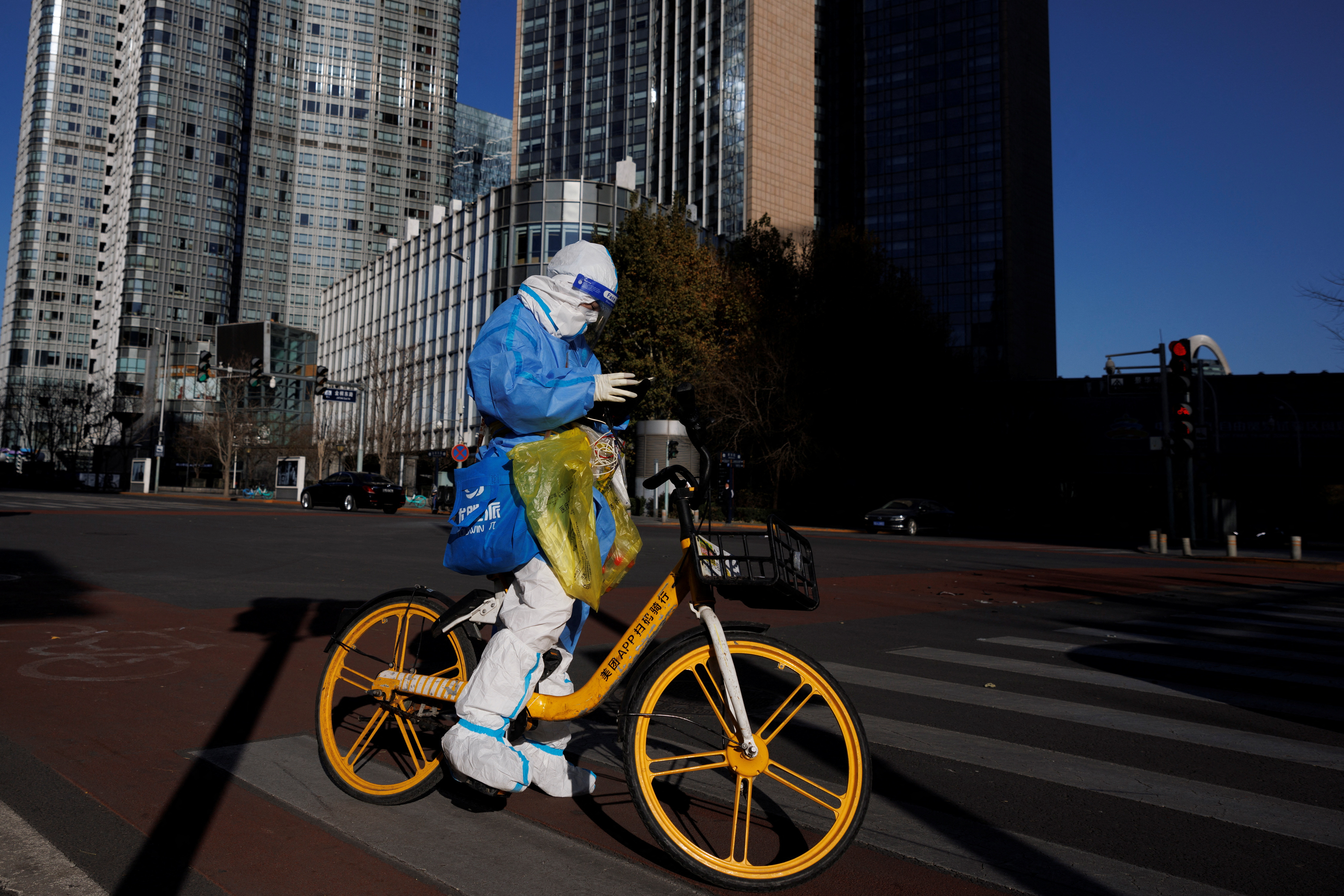 A health worker in a protective suit waits at a traffic light in a street in the central business district (CBD) that is largely deserted because of work-from-home orders as coronavirus disease (COVID-19) outbreaks continue in Beijing, China November 30, 2022. REUTERS/Thomas Peter TPX IMAGES OF THE DAY