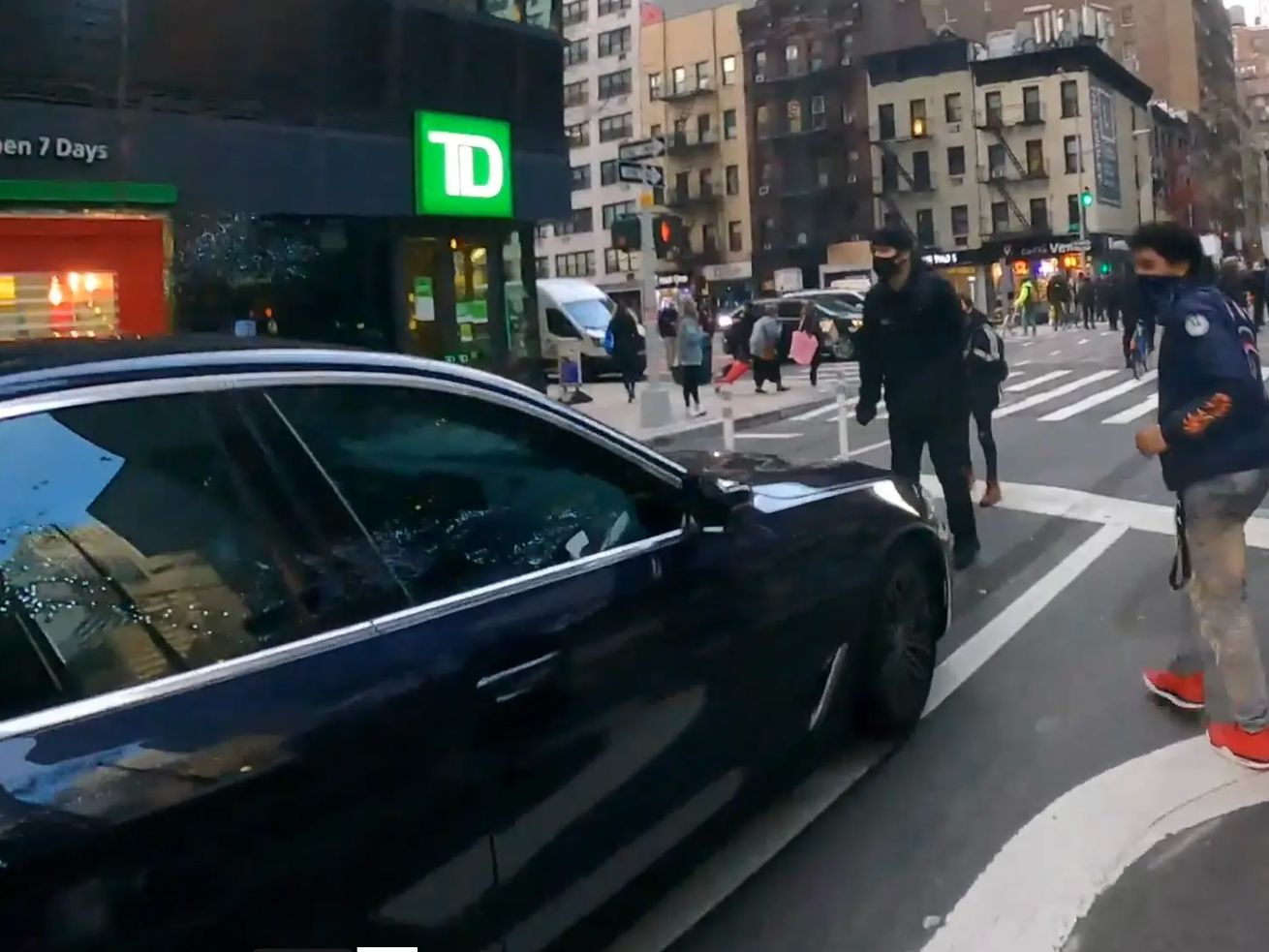 Protest organizers seen trying to prevent a BMW from driving through marching crowd in Manhattan on Dec. 11, 2020. | Screengrab/Copwatch.Media/Vimeo

A Queens woman who allegedly plowed her BMW through a crowd of protesters in Midtown got hit Monday with another misdemeanor charge — but the injured say the new rap amounts to a slap on the wrist for her and a slap in the face for them.

Kathleen Casillo, 52, of Howard Beach, had previously been given a desk appearance ticket for misdemeanor reckless endangerment after the Dec. 11 incident that sent six people to the hospital. She was further charged with reckless assault in the third degree Monday after victims pushed for even more serious charges.

The two misdemeanors carry a maximum sentence of one year of jail.

“I am not satisfied,” said Roque Rodriguez, who suffered a broken leg when the BMW struck him.

He believes the driver meant to harm the group of Black Lives Matter protesters who were marching in support of hunger strikers at a New Jersey Immigration and Customs Enforcement facility. 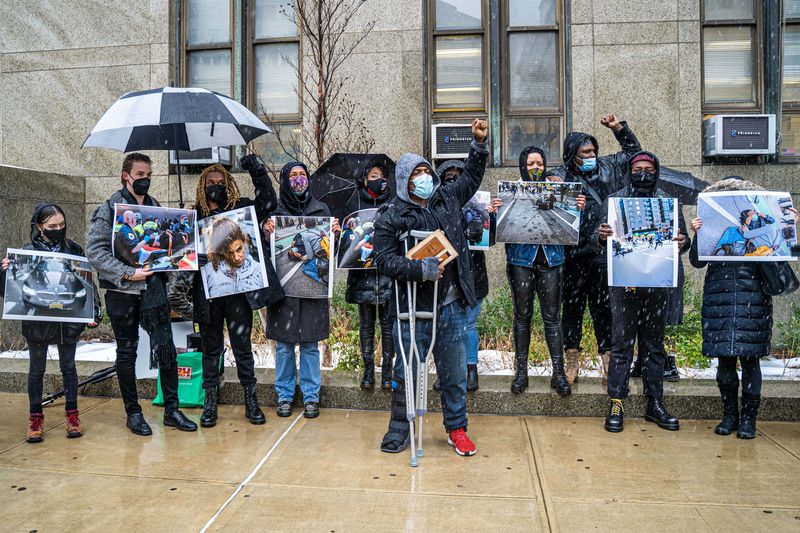 “The state has not acknowledged that Kathleen Casillo drove her car into at least five other people who were hospitalized as a result,” Rodriguez added. “And these charges don’t acknowledge them.”

Several videos taken at the scene show Casillo driving through the marchers after organizers asked her to slow down, then accelerating as she hits people.

“I saw the car speed up. It was jaw-dropping because a car should stop when that happens, but it kept going faster,” Gia Lisa Krahne, a protester who tended to the injured that day, told THE CITY. “I know I was screaming, and I don’t scream at anything.”

A Push to Upgrade Charges

To Rodriguez, who runs a yoga studio in Woodside, Queens, the incident amounted to an attack.

“She tried to kill me and a group of people that I love,” Rodriguez said on Monday, balancing on crutches outside of Manhattan’s criminal courthouse as snow fell. “The state is trying to tell me that she didn’t do that. The state wants to say she made an oopsie, that it was an accident. No.”

The video of the incident is eerily reminiscent of footage of James Fields, who in 2017 plowed his car into a group of protesters in Charlottesville, Va., killing one. He was charged with federal hate crimes and eventually sentenced to life in prison in 2019.

Rodriguez and his supporters have lobbied the DA’s office for weeks to upgrade the charges to a felony.

But Rodriguez said Assistant District Attorney Andrew Mercer recently told him the office couldn’t charge Casillo with felony assault because the prosecutor “couldn’t prove that I had a protracted injury” — as defined by the penal code — and her intent was not known.

“Her intent is clear to everyone that watched the video,” Rodriguez said during a Zoom phone-banking event on Friday where supporters called and emailed Mercer, Manhattan District Attorney Cyrus Vance and the DA’s Hate Crime Unit.

Krahne was among those who wrote to Mercer, arguing Casillo “should be held accountable,” she said.

“I don’t understand how they can justify that that was not intentional. It doesn’t make sense. There was no reason for her to be scared. We have all the footage leading up to it. She did that on her own,” she said.

Screenshots posted the day after the incident show Facebook and Instagram accounts for a “Kathy Bell Casillo” with posts supportive of then-President Donald Trump’s handling of the COVID-19 pandemic and likes for a group called “I Stand With Rudy Giuliani.”

Both accounts have since been deleted. It is not clear whether they belonged to Casillo, who could not be reached by phone or email. A call to her attorney, Daniel Tanon, went unanswered on Monday.

A spokesperson for the Manhattan DA’s office, Emily Tuttle, declined to comment on the case except to say “the investigation is ongoing.” Casillo is due back in court April 14.

Those struck by the BMW are among the many New Yorkers frustrated by a system where very few drivers face serious charges after crashes that injure or kill pedestrians and cyclists.

The district attorney’s office rarely charges drivers with crimes, as the cyclist-advocacy site Streetsblog has reported. That follows a larger trend across the city of drivers escaping crash scenes with little punishment, even in the case of hit-and-runs.

Street safety advocates and the families of crash victims have pushed for years to change how crashes are investigated and overhaul the laws that determine how drivers may be prosecuted.

Earlier this month, the City Council pushed forward with a proposed reform: a law that would give the responsibility for crash investigations to the city Department of Transportation, rather than the NYPD. The bill would allow the DOT to inspect crash sites, preserve evidence and interview witnesses as well as require the agency to publicly release investigation reports.

News And Opinions
News and Music
9:26 AM 2/24/2021 – Sund: Capitol Riot was a military-style operation
by The News And Times Information Network