Sunset Park Councilman Carlos Menchaca says he’s jumping into the 2021 mayoral race, hoping his experience as an on-the-ground community activist will leapfrog him atop a crowded Democratic field of candidates.

“In a democracy, the community is where the power is. They control the vote, they control the next leader,” Menchaca told Brooklyn Paper. “And I feel that tension with government. Government has failed to meet that and reflect that.”

If elected to the city’s top office, Menchaca will be the first openly gay mayor, as well as the first Latino mayor since 1917.

Menchaca’s candidacy comes just weeks after he played an integral role in stopping the Industry City rezoning in September, which would have allowed for a $1 billion redevelopment of the 35-acre campus in Sunset Park.

Proponents of the proposed rezoning lauded the plan for potentially bringing thousands of jobs to the area while the city faces a multi-billion dollar budget shortfall, but local activists who worried that the revamped space would accelerate gentrification.

Menchaca, who held outsized power over the rezoning’s approval as the area’s local city legislator, initially issued a series of conditions for the developer to meet before he would support the land use change — but ultimately ushered a complete denouncement of the project following pressure from advocates.

The term-limited councilman citied a supposed lack of attention payed to community concerns about rising rents and displacement, and the weak enforcement mechanism to hold Industry City’s developers to account for their promises.

Many political observers likened the death of Industry City’s rezoning and the adjoining promises of economic opportunity to the withdrawal of Amazon’s deal to build a new headquarters in Queens — which would have created and estimated 40,000 jobs in the city.

But Menchaca sees the death of the Industry City project as jumpstarting a citywide movement that prioritizes local voices over corporate interests — and one that could propel him to Gracie Mansion.

“Sunset Park was at the forefront of the battle that bought a developer to their knees,” said Menchaca, who added that the city’s land use approval procedure, known as ULRUP, must give locals more of a say in local development. “ULURP must be different. It must give capacity to communities to confront these global corporate projects.”

Menchaca will face off against fellow progressives Maya Wiley, Scott Stringer, and Diana Morales, as well as more than 20 others in the 2021 mayoral race. But to prove he’s most in touch with the people, Menchaca will travel to each neighborhood to speak to locals before drafting most of his policy positions, he said.

“The first thing is listen to the people. It seems pretty simple, but it’s one of the most common things that this administration hasn’t been able to do very well,” he said. “My first phase of this is to engage people at the most local level, and build policy from the ground up.”

If elected, Menchaca said that he would implement the Climate Works for All plan to reduce emissions and create green energy jobs, install municipal broadband to give all residents high-speed internet, and cut funding to the police. Menchaca, who voted against the 2021 fiscal budget in the spring for failing to cut sufficient funds from NYPD, said the city must “reimagine public safety.”

“In a moment where communities need resources and there’s a budget crisis, defunding the police department and refunding our communities must happen now,” he said.

From his seven years in office, Menchaca said his proudest achievements include the creation of the IDNYC card — a government-issued identification card for all New Yorkers regardless of immigration status — and his emphasis on participatory budgeting, which gives local a say in how to allocate their neighborhood’s capital resources.

Those efforts point to his experience advocating for everyday New Yorkers, he said.

“The mayor’s administration is [so] powerful in this city … and I can’t imagine a better partnership between the people and my administration,” he said, promising to be “the people’s mayor.” 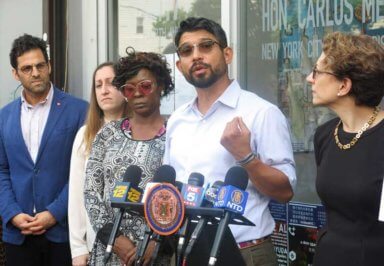